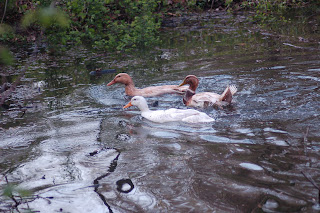 The recent rainfall filled the little pond near the house, so I've been letting the ducks out to play. If only they'd stay at the pond instead of wandering along the creek to sample every pool deep enough to paddle through. If only they carried watches with little alarms to remind them when it's time to return to the safety of their night quarters.
Posted by LauraP at 5:36 PM 2 comments:

You shall not pass! 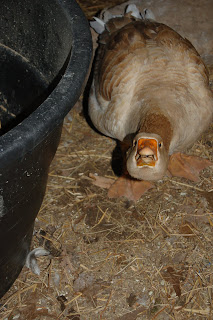 Goose Goose protects 'her' ducklings with impressive ferocity. I've tried for weeks to get a decent photo, but of course, she spots me and the camera and turns into a sweetie. So this is as good as it gets.
When geese go into protective mode, they stretch their necks straight out, holding their heads low while they hiss and stalk toward whatever they perceive as a threat. (Unless it's REALLY big and scary -- honk, honk, run!) That's a warning, and most creatures back off. Especially if they've ever been pinched by that strong, hard beak. They'll also fly at your head and beat you with their wings. That hurts.
Actually, all three of the Buff Orpington geese take turns watching over the ducklings. The mated pair often have 'other business' to attend to, though, which leaves Goose Goose in charge much of the time. She doesn't seem to mind as she has few other demands on her time. The white rooster she adores apparently has made it clear that they're just friends.
Posted by LauraP at 7:43 PM 2 comments: 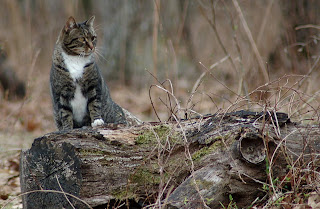 Hickory at age 10, the last living member of the barn cat trio of Hickory, Dickory, and Doc

When one spends a great deal of time with a community of animals, certain things become apparent. Personalties, hierarchies, likes and dislikes, and occasionally the odd alliance between unlikely companions. Hickory clearly liked her littermate Dickory best, and she never bonded closely with any of the other cats. Yet the kitten she terrorized most turned out to be the closest thing to a kitty friend she had, so long as he acknowledged her superiority and followed her rules. He alone was allowed to cuddle in the old ratty chair in the barn with her, though only on the coldest of nights. Humans, however, were best utilized as Hickory petting slaves. Idle hands weren't to be tolerated, and those who ignored her hints might get a stronger hint -- a quick poke with the claw tips. She wasn't vicious. She was just reminding you she was there...waiting...getting impatient.

Several years ago she developed a dark spot in one eye. The spot gradually spread until she had one good golden eye and one brown eye. In the last year, her eyesight became worse in the dark eye. She could still sense movement, but not what caused that movement, so waving a hand on that side often earned a nasty hiss and a smacking. Despite her disability, she maintained her position as Queen of the Barn. No cat dared venture within her defined perimeter without permission. Those allowed within that circle had to follow her rules.

1. No stealing cuddles from the humans -- hiss, smack.
2. In fact, do not think of even making eye contact with the humans -- growl, hiss.
3. No milk until Hickory finishes her share as defined by her, and then no milk unless Rules One and Two have been properly observed, several additional minutes have passed, and express permission has been granted by Hickory. Growl. Hiss. Smack, smack, smack, smack.
4. First dibs on fat mice go to Hickory. Leftovers distributed via Rule Three terms. 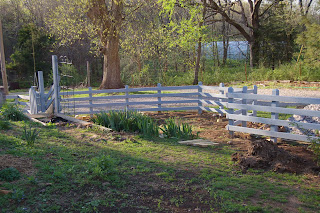 Behold the new fence for my herb & perennial garden. My genius husband unearthed and moved many large rocks while digging those postholes. Here at the edge of the Ozarks, we grow rocks really well. The fence needs another coat of stain and some chicken wire around the bottom to keep the chickens out, and then I can replant all those herbs the poultry ate last summer.
Posted by LauraP at 10:01 PM 6 comments: