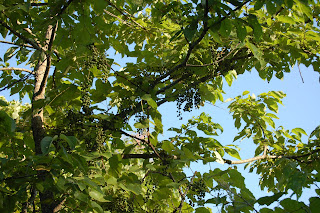 I'd feared that the late spring freeze had wiped out this year's crop of wild grapes, but I spotted these beauties among the leaves of a pecan tree at the edge of the back pasture. They're unusually large for wild grapes, too. I suspect that's partly due to the location. This vine has its roots in a swale that directs rainwater from the hillside toward the pond and thus receives a greater share of moisture. I'm anxious for them to ripen and scouting for more grapes I can reach. And wondering whether the birds will beat me to the best ones. (A smart gambler would bet on the birds.)
Posted by LauraP at 5:34 PM 2 comments: 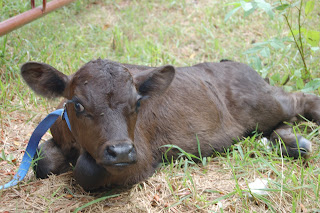 Lottie, the 7-year-old Jersey cow, finally had her calf Sunday. He's half Limousin, sired by the strapping young black bull who lives just down the road. Lottie choose a quiet spot in the trees that could be reached only by traipsing through high weeds and a thorn thicket. I tried to persuade her to bring the little guy up to the barn, but he was too wobbly legged for much of a walk. I thought for a bit that I might succeed, but then Lottie spotted the dogs.

I'd left the dogs about 50 yards away, out of sight, with strict orders to stay put. They got restless with me out of sight so long, and so they crept closer. The puppy saw me and rushed forth with excitement, only to learn just how paranoid and protective a mama cow with a newborn calf can be. The cow lowered her head and charged, I yelled, ran, and waved my big stick. Bebe, the farmcollie, dashed into the fray. The cow rolled the pup and Bebe both. I shouted 'Run' and all the dogs but one took off. (We learned 'run' a couple of years ago when the skunk was spending time in a burrow under the barn.) Ralphie, the English Shepherd, stayed with me. The cow shook her head at us and pawed a bit, but she didn't charge again. We found Blue, the Aussie, down by the driveway gate. Bebe apparently ran all the way back to the front porch with the pup, then came back alone. 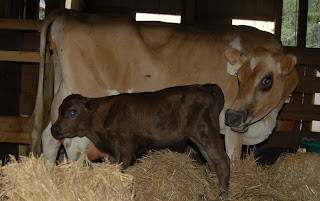 This morning, both Lottie and Rosie, last year's heifer, appeared at the yard gate where the big water tank is located and waited as usual for their morning grain. The calf was missing though. I coaxed the cows into the barn and locked them in separate stalls, then headed out to search for the calf. After a half hour of walking a grid pattern in the likely section of tall weeds and thorn tree saplings, I noticed both dogs had stopped tracking and were staring into a thick weedy patch, tails wagging. Yep, there he was. He refused to stay on his feet more than 30 seconds and wouldn't walk. So I half carried, half-dragged him out to the mowed section of the pasture, then left the dogs to guard him while I went for the truck. The dogs did their duty, I managed to lift 70-plus pounds of wriggling calf onto the tailgate, and somehow got the calf into the barn with his mama without getting hurt. He stood when Lottie demanded it, walked around, nursed, and even gave a few tentative hops. A good meal and a quiet day in the barn have improved Lottie's disposition. I put Rosie in a stall across the aisle. She's bred to the same Limousin bull and due anytime. I believe I'll keep her in the barn and avoid all the drama among the thorns and ragweed. 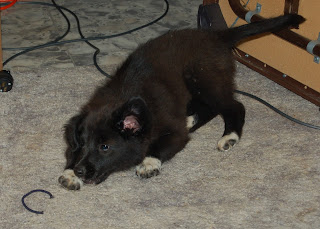 Dinah - age 9 weeks - taking a break from helping me around the house to subdue a wild, unruly old hair band. She's an American Working Farmcollie from the same line as our Bebe. She's met all the livestock and exhibits a healthy respect for cranky pregnant cows and geese. Bebe's teaching her how to help out in the barn. Blue, the Aussie, is teaching house manners and how to ride in the truck. Ralphie, the big English Shepherd, is tolerating her.
Posted by LauraP at 9:07 PM 3 comments: