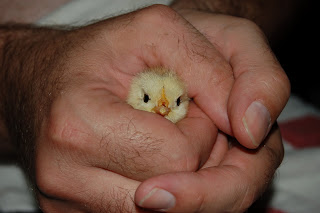 Nope, he's not choking it! This chick was rowdy before it came out of the shell, and there are only two ways to keep it still. If I set it on my shoulder, it'll burrow into the long hair at my neck and sing soft happy chirps -- for about 20 seconds, and then it pops up and darts about, which isn't a healthy activity for a chick so high off the ground. The Genius Husband prefers to wrap these wild peeps in his big hand with just a tiny fisthole opening to peer out from.

For two days, this chick's egg rocked and bumped against the others in the incubator. The early peeps were muted, but as the hours passed, they gained in fury. To make matters worse, it was the only chick to hatch from that small batch of eggs, though it does seem to have the energy and vitality of a half dozen packed into one tiny ball of fuzz. For two days it peeped with the volume of 6 or more, and I took to wearing headphones while I worked so I could concentrate. Fortunately, a large clutch of ducklings hatched a few days later so he has company now. I've moved them all to larger quarters in one of the barn brooders.

Growing up with ducky siblings, I suspect he'll have identity issues. We've seen this happen before - ducklings that walk hunched so they'll not stand taller than their chicken friends, guineas who eschew the company of their kind and live with the hens instead. Amusing but relatively harmless quirks. But danger lurks for a chick who thinks he's a duck, for there are buckets about, and he can't swim.
Posted by LauraP at 10:37 AM

Awwww! Wish we had some. We're down to only 2 chickens now. (Due to coyotes.)

The identity issues are hilarious - I would love to witness them.

Totally understand the identity issue. I raised 4 chickens w/ ducks last year and they are my toughest hens I have. All winter they stood out in the snow/rain like nothing. Soaking wet and not a worry...

I can't tell you how many times I had to haul them in the barn due to my worry, but they keep on keepin on!