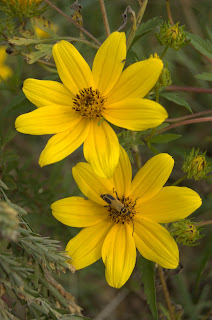 This daisy-like flower appears in late August and blooms well into the fall. I suppose they can grow about anywhere, but I see them mostly in the lower ends of pastures and prairies where the soils tend to be a bit more moist. I saw great sweeps of tickseed yellow in the prairie conservation projects I passed on the way to and from town yesterday. Their presence is less dramatic in our front pasture, but beautiful still.

The common name, Tickseed, no doubt comes from the appearance of the plant's distinctly black seeds, which are about the size of an adult dog tick. The plant self-seeds readily, and it seems about as easy to grow as the domestic tickseeds I plant in my flower beds. I even had a blooming plant in the greenhouse in late spring, a volunteer sprout I let grow out of curiosity. It bloomed from late May to mid-June. No doubt the warmth and long growth season of the greenhouse tricked it into early flowering.

Walking among the tickseed in the pasture, I noticed that nearly every plant has at least one of those distinctively marked yellow and brown bugs among its flowers. They're Pennsylvania Leather-wings (Chauliognathus pennsylvanicus), and according to the information in my favorite bug book, they're a beneficial insect. The adults eat pollen, nectar and small insects. The Larva like grasshopper eggs, small caterpillars, and beetles. My bug book also says that some Leather-wing species native to the Great Plains are used for biological control of Corn Earworm caterpillars. That alone would put Leather-wings on my Good Bug List.

FYI - My favorite bug book is The Audobon Society Field Guide to North American Insects and Spiders. Good pictures, clear entries, and well-organized.
Posted by LauraP at 6:18 AM

I spent a good part of Sunday mowing down great stands of tickseed. They like the wet areas below the dam, and they were filled with those bugs you described.