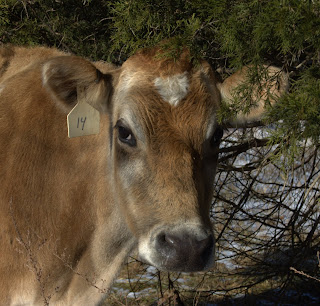 Lottie's had a rough week. Her 4-month-old calf is a rather vigorous nurser. Add a bit of chapping from winter weather, and her tender parts got quite sore. She quit letting the calf nurse, which led to other issues. She wasn't too amenable to hand-milking either. We tried one thing, then another, and she got a little better. It didn't last, and we finally had to call the vet out. He administered a super $30 antibiotic that I can't buy anywhere off the shelf, plus an anti-inflammatory. He left two more doses of the anti-inflammatory, with orders to pick up aspirin boluses at the office next time I'm in town. We'll grind those up and add them to her grain for several more days.

Today, on the third day of treatment, she's regained some of her appetite and lost most of the swelling in her udder. She's allowing the calf to nurse, and letting me strip her out. It'll be a while before she's back to normal though. I'm hoping there's no lasting damage to her udder, but it's too soon to tell.

There are other repercussions. It'll be several weeks before her milk is cleared for human consumption. Some medications pass through the animal's body and disappear quickly. Detectible residues may remain longer with others and can be present in the milk or meat. We chose a longer-acting, broad spectrum antibiotic this time for Lottie, so we'll be observing a longer withdrawal period. The milk's still safe for the calf, especially one as healthy as hers. And it's probably safe for humans who aren't allergic to any antibiotics. But probably isn't good enough, and that's why these withdrawal periods are established by the drug manufacturers and the FDA here in the U.S. (Other countries have their own regulatory agencies that deal with these rules.)
Posted by LauraP at 7:30 PM