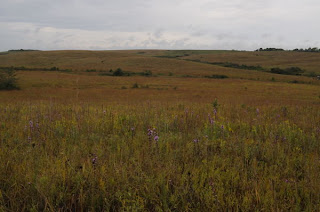 I know that a hurricane is a fearful thing – my grandparents spent their last decade or so in a beach community on the Florida panhandle. They evacuated for hurricanes and rode out tropical storms in their little block house, and they described each ordeal in great detail, pictures included. I have great sympathy for those in Gustav’s path, and Hanna’s, and now Ivan and all the future storms that may come to pass.

Still, it would be ungrateful to not give thanks for the gentle rains that sometimes reach us here in the Midwest from the occasional fading hurricane, blown far inland. Early last week, the fields and prairies lay parched beneath drying breezes with great cracks in the dirt. We watered our gardens some and tended the potted plants, but we haven’t the infrastructure for irrigating pastures nor the will or wherewithal to install it. And so the pastures faded and plants dried and died or simply went into a dormant state. Then came Gustav, and in this area at least, the rain was steady and gentle. It was exactly what we needed.

Above, pictured, is Wah-kon-tah Prairie, which I pass on my way to and from town. Damp and revived, in a break between showers, the wildflowers wave in a slight breeze, and there’s a low buzz of insects. Gustav ended our local summer drought and broke the heat wave – one not so impressive as years past but uncomfortable nonetheless. After the remnants of Gustav passed, we had a few nice days, followed by more gentle rain that moved in from another direction. The extended forecast includes more of the same, pleasant days, rain, and then more sunshine.

Here at the farm, we’re catching up on neglected chores. String beans are ready in the second chance garden, which earned that name during the summer replanting. The earlier crops were washed out by flash flooding this spring. What wasn’t washed out completely, slowly drowned in the mucky wetness that remained, thanks to the heavy rains that made the spring one of the wettest in memory. After that, it felt odd to be complaining about the lack of rain in August, but we did. Some.

Much has changed since I posted last. A favorite ewe was lost to predators, and four new ewes fill her stall with their demanding voices. The puppies have grown and gone to their new homes, all but one. I kept Freckles. He’s doing well, and I’ll write more about him later this week. The calves have grown as tall as their mamas and still aren’t weaned. Their nursing is a ridiculous sight. The last of the season’s chicks are beginning to feather out, and birds of all ages and sizes race about after any bug that dares to move.
I spent much of the spring and summer in treatment for spinal issues – bulging discs and misalignments, the type of thing one encounters with age in a life full of small adventures and mishaps. Painful and inconvenient, but hardly life threatening. It’s simply life’s way of reminding me that I’m not 25 anymore, and it’s time I stop acted liking it. And thus I’m heeding the advice of neighbors older and wiser than me and am changing how I do a few things, acquiring labor-saving equipment and generally trying to act more like a grownup.

At least when they’re watching. When it’s just me and the pup in the back field, all bets are off.
Posted by LauraP at 9:26 AM

It's hard to grow up:) But please take care of yourself. We've missed your posts, and can't wait to hear about Freckles.

I found your blog through a link from another blog and what a pleasant surprise! I very much enjoyed my visit and your descriptions of the farm- I had sheep and chickens growing up and the memories are wonderful!

As well it should be, when it's just you & the pup.

Nice to see you writing again.