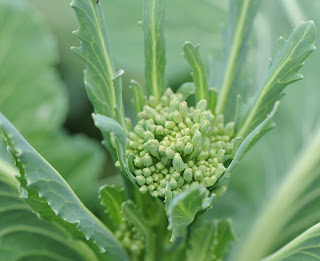 Champion collards, planted in the greenhouse September, 2007. Collards, like most brassicas, are biennial - that is, they go to seed their second year. Collards don't keep calendars. They had their warm season and winter, and now it's warm again. So it's the second year by plant reconning.

It looks like little side shoot of broccoli, doesn't it? The taste is more bitter than I like though, probably because it got pretty warm in the greenhouse the day before I took this picture. Broccoli can be pretty strong, even bitter, when harvested in hot weather, right before it bolts.
Each of those little green beads is a flower bud that will open into a tiny bright yellow bloom. 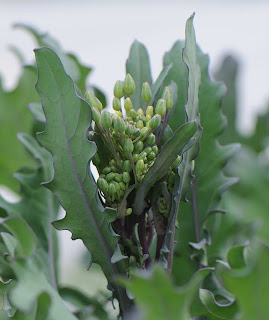 Ornamental Kale - seeded in August 2007, transplanted to a center bed of the greenhouse in late September. It was a weak plant, and I stuck it in the ground, almost as an afterthought because I had a little empty spot. I didn't expect it to live. It did, and while its performance wasn't the least bit impressive, I admire its spirit. Plucky little thing, toughing out the winter despite its rough start and now budding up for blooms. It reminds me of some people I know . . .
Posted by LauraP at 10:15 AM