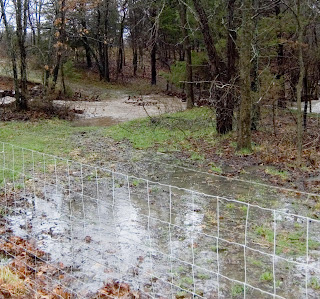 It rained hard much of the day yesterday, with wind, lightning, thunder, and some hail to keep things interesting. It was a good day to be a duck -- those idiots played outside all day. Their only concession was to tuck their heads under their wings when the hail started. (They could have waddled into the barn, but they have tiny duck brains and apparently didn't think of it.)

A short while after lunch, the wind & rain eased. I had an appointment in town and was facing a dilemma. We'd lost electricity for the second time that day, and I was worried about keeping the eggs in the incubator warm enough. That pile of blankets I wrapped around the incubator would only suffice for so long -- and then . . . well, the next option was the time-proven method used by farm women everywhere -- body heat. Tuck those eggs inside the shirt, and hold them in place however works best. You understand, I'm sure. So, I had to decide soon -- cancel the appointment or risk the eggs. And don't tell me I could have taken them along in my . . . shirt. I could have, but I'm just not going out in public with 4 goose eggs and 18 duck eggs augmenting my figure.I decided to walk around, maybe drive to a neighbor's and assess the situation. If they had electricity, I could leave the incubator with them for a while.

The photo above shows what the yard looked like below the house. That patch of muddy water is the creek flowing two feet above the huge culvert a previous owner put in when building the roadway to the back fields. The culvert is, fortunately, well anchored with concrete and rock walls I didn't know those walls existed until the flood washed away the fill dirt hiding them. Below is what the crossing looked like a couple hours later when the water had receded. There used to be a fence along the right side of the crossing. It's now hanging over the creek about ten feet downstream with a couple of logs wedged in the woven wire. 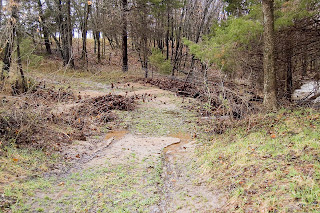 This morning, the puddles were gone, and the mud had firmed enough I could walk across and survey the damage. That pile of brush in the roadway was hard to clear . . . because it was still rooted in what was left of the earthen bank. The floodwaters had bent the wild rose bush & several saplings flat, then dumped mud & sand over their emerging leaves. I scooped their branches free of the muck and pushed them upright. Maybe they'll live. 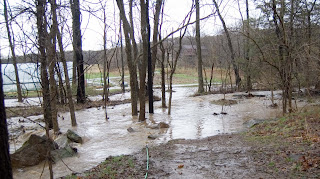 This is what the path to the garden looked like a few minutes after I took the photo of the flooded field road. It's a spring-fed branch that runs into the main creek. This time of year, it might be 18 inches wide after a normal rain. By summer it'll be bone dry, and I can drive the mower through pulling a cartload of compost. That flooded section beyond the trees is part of my big garden. Half the peas I planted there week are washed out of their rows, and they'll probably sprout all over the rest of the garden patch and further downstream. I saw a few exposed seeds left in place though. They looked ready to sprout. I'll poke them down into the mud as soon as I can walk to them without sinking to my knees. The greenhouse ditch performed admirably and channeled the runoff away from the greenhouse itself, so that patch of garden is in great shape. It's nicely damp but not mucky. So I can go out there and weed anytime. Oh joy. 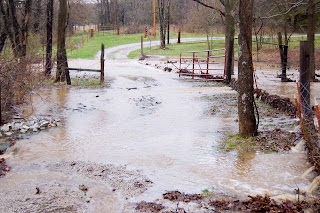 By the time I'd had enough of admiring the muddy flood waters, the electricity had come back on. I could leave without worrying about the incubator. This next photo is what I saw when I came around the first corner of the driveway. Probably it was fine to drive through, but I grew up in the hill country along the Mississippi River where we know a bit about floodwaters and take such things seriously. I got out and grabbed the pole I use to clear blockages from the culverts. Walking carefully in my tall boots, I checked to make sure the crossing was intact at the culvert, and then I walked the flooded section, testing with the pole to make sure the water hadn't washed out any holes big enough to swallow my truck tires. Fortunately, all the holes were of moderate size and manageable. The current wasn't a problem for me on foot, either, so I wasn't worried about the truck being swept away.


I put the truck in 4WD though, just in case, and I eased along the driveway, just like Grandpa taught me back in the day when his idea of a Sunday afternoon's entertainment was a tour of the region's flooded spots. I got out to the road with no problem but left the truck in 4WD because when you have it, you use it if there's an excuse. A narrow back road with more mud than gravel makes a fine excuse, if you ask me.

The next photo is what I encountered about a mile further. I didn't know it at the time, but there was another spot just as bad over the next hill. Fortunately, the guys in the power company trucks knew an alternate route that was clear -- just barely. Specifically, the water had stopped flowing over the highway about five minutes before.

I'm not sure what the official tally of yesterday's rainfall for our area is. Everyone I asked just shrugged and said LOTS. A neighbor estimated it at 5-6 inches, judging from the accumulation in various buckets he left out. Most of that fell within a couple of hours, hence the flash flooding. Another neighbor who's been in the area longer said it hasn't flooded like this since '93 when he was building his house.

Here's the view of the driveway when I returned a couple hours later. See the log? See what's left of my fence? That's used to be the only fence on the place that could keep my Babydoll Southdown ram in. I didn't worry about him or the goats sneaking out overnight though. They don't like crossing water. They hate walking in mud, and there's a lot of deep, sucking mud out there. By morning, the water was mostly contained within the creek's usual channel. I moved the log, raked the debris out of the fence and shoved it upright as best I could manage, given the soggy state of the soil the metal posts were sunk into. I'll give it the attention it deserves once the ground dries out enough to hold the posts properly. The driveway will need attention, too, more gravel to fill the holes and replace what washed into the pasture. That'll have to wait a few days though. The forecast for later this week calls for a lot more rain. I'd rather wait and just fix everything once.

Besides, my overalls are drenched -- to the knees from wading in the water to clear debris from critical spots, and then all over because I miscalculated a step and fell in the creek. Too bad I don't have pictures of that, eh?

Build an Ark! You already have the critters!

Wow. I would say I envy you all that rain, but really I wouldn't want it all at the same time either!