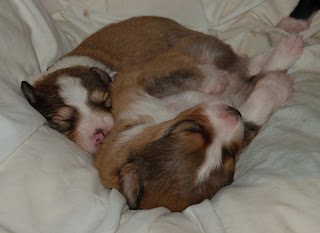 Hippo's the one on the right. He's the largest male, the largest altogether of the litter. He was the first to open his eyes, and he's usually the first one headed for mama when she enters the room. The little female pup next to him has the sweetest face, and if she's awake she yips at me when I step into the room. All the pups have their eyes open and can scoot pretty quickly now that they can see where they're going. They still sleep a lot, but they're getting interested in their surroundings. Two have climbed out of their bed and made it out to the hallway. Tomorrow, the gate goes up in the doorway.
Posted by LauraP at 8:54 PM